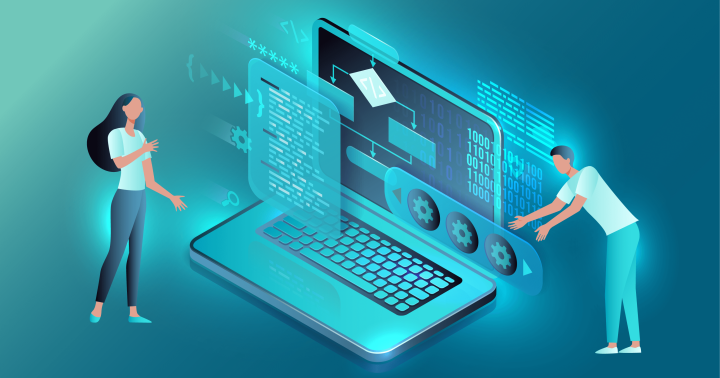 Venmo, Robinhood, Chime, PayPal, MoneyLion, Mint, Card Curator—fintech apps such as these have disrupted and transformed the banking and financial service industries in the last few years.

Up to 75% of global consumers use at least one fintech service, and that number is expected to rise as more people embrace contactless payments, mobile banking, micro-investing, online lending, travel hacking, and other fintech-powered financial activities.

Unfortunately, consumers aren’t the only ones who love fintech. Fintech apps are gold mines for cybercriminals looking to steal valuable personal and financial data.

We’ve put together this list of eight high-risk fintech cybersecurity challenges to help IT leaders like you protect your organization from determined cybercriminals.

Apps are the face of fintech, but APIs are what make fintech magic possible—and are the primary target of many modern cyberattacks. Most of the eight cybersecurity threats below are directly related to API security.

Cybercriminals use stolen or hacked login credentials to impersonate users and access accounts on fintech apps, allowing them to steal both money and sensitive personal information.

A global survey of financial institutions in 2021 revealed that account takeovers had become a favorite source of attack by cybercriminals, with the number of attempted takeovers rising 282% between 2019 and 2020.

One of the most common identity theft tactics involves API attacks that compromise authentication tokens and other verification methods meant to keep accounts secure.

To combat this threat and protect users, implement strong authorization and authentication mechanisms as part of your security policy.

From credit card and bank account numbers to addresses and security question answers, fintech apps contain an incredible amount of personal and financial data. This sensitive data is highly coveted by cyber attackers looking to either use the data to commit financial fraud or profit by selling it to others.

To get the data they want, determined thieves launch phishing attacks, sneak in malware, and take advantage of exposed API endpoints without proper access controls.

Unfortunately, they’re good at what they do and have managed to steal millions of account details and credit card numbers from fintech startups and established companies, including well-known institutions such as Equifax and JP Morgan Chase.

Business logic flaws present the most dangerous type of vulnerabilities that make it possible for users to exploit the legitimate functionality of your application to gain access to sensitive data and must be identified and corrected before hackers have a chance to exploit them.

They are also very time-consuming and difficult to test for manually because you have to craft a separate test for every possible way the API could be abused.

In DDoS (distributed denial of service) attacks, hackers flood an app with traffic in an attempt to crash it—and hopefully, force a security breakdown in the process.

Unfortunately, many of the APIs underpinning fintech apps don’t have the rate-limiting or resource restrictions required to fend off these targeted attacks. Because of this, DDoS attacks are a serious security risk to many fintech applications.

Rate limiting is the practice of restricting the number and/or frequency of requests a given user or IP address is allowed to send within a certain timeframe. Enforcing this restriction can help you defend against DDoS attacks.

Many popular fintech functions, such as mobile transfers, require apps to interact with traditional banks. Integrating the modern high-tech apps with the legacy systems often used by established financial institutions is a difficult technical challenge.

The solution usually involves multiple custom APIs, which introduces numerous potential security vulnerabilities. Without extreme attention to detail and thorough testing, it’s easy to leave a loophole for cybercriminals to find and exploit.

Conduct regular vulnerability scans to ensure exposed API endpoints are protected from abuse. Do this after every change to the source code, even the slightest tweaks, as patching one vulnerability could open another vulnerability elsewhere.

You’ve probably noticed a theme in our list so far: cyberattackers look for errors and vulnerabilities they can exploit and use to steal user data and identities.

One way hackers find errors is through a method called “fuzzing” or “fuzz testing.” This testing technique feeds applications or APIS with invalid, unexpected, or random data. The program is then monitored for exceptions such as crashes, failing built-in code assertions, or potential memory leaks.

Until recently, fuzzing was a slow, manual process, which gave security teams a chance to find and fix errors before hackers could take advantage of them.

Now, however, cybercriminals are increasingly using AI and machine learning to automate the fuzzing process and uncover zero-day vulnerabilities—especially in APIs.

Minimize the amount of data used in server responses to limit the data attack surface area. By using the least amount of data necessary as well as random testing and data filtering, you can reduce the risk of sensitive information falling into the hands of cybercriminals.

Phishing attacks have come a long way since the clumsy “Nigerian prince” scams of the early 2000s. Users have grown smarter, but so have criminals - in fact, 36% of data breaches involve phishing.

Phishing emails are often nearly indistinguishable from legitimate emails, making them a major security risk to fintech apps and users. The consequences of a successful phishing attack are high; once hackers have access to the system, they can introduce ransomware or other malware and cause massive identity theft or a data breach.

Invest in cybersecurity training for your employees to prevent the severity of phishing attacks and the likelihood that they will succeed.

“The chain is only as strong as its weakest link.” This is especially applicable to fintech cybersecurity. Reports indicate that insider threats—risks stemming from employees within the company—represent the primary cause for 60% of security breaches.

In rare cases, the threat comes from a disgruntled or dishonest employee who intentionally destroys or leaks data.

Most of the time, however, the threat to your security comes from a simple mistake. It could be an employee who falls for a phishing scam and accidentally gives hackers access to your system or a developer who made a coding error that creates a security flaw.

Either way, it’s a threat you can’t afford to ignore.

Implement strict password and account management policies and practices within your organization to mitigate the risks related to insider threats.

Regulatory compliance isn’t a cybersecurity risk per se, but it is a challenge. The fintech industry is strictly managed and must comply with a wide range of banking regulations, data privacy laws, payment processing standards, investing regulations, and standard security protocols.

Keeping up and complying with all the requirements is difficult but necessary. Regulators won’t hack you or steal your data, but they will impose severe penalties if you suffer a data breach due to lax security or compliance.

Protect Your FinTech APIs with APIsec

There’s no question about it: one of the best ways to prevent fintech cybersecurity issues and nullify potential threats is to improve API security. APIsec has the tools you need to strengthen data protection, close API security loopholes, and prevent cyber incidents.

Contact our team or schedule a free vulnerability scan to learn more about how our automated API testing platform can protect your financial technology (and your users) from advanced cyberattacks.